Congress eyes renewed push for legislation to rein in the NSA 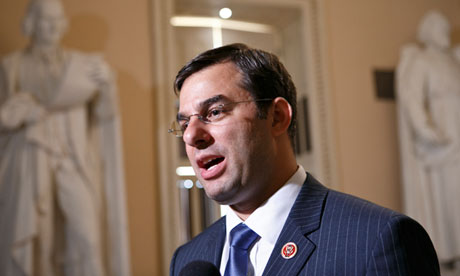 Members of Congress are considering 11 legislative measures to constrain the activities of the National Security Agency, in a major shift of political opinion in the eight weeks since the first revelations from whistleblower Edward Snowden.

The proposals range from repealing the legal foundations of key US surveillance powers to more moderate reforms of the secretive court proceedings for domestic spying. If enacted, the laws would represent the first rollback of the NSA's powers since 9/11.

The Guardian has spoken to six key lawmakers involved in the push to rein in the NSA, and those involved in the process argue there is now an emerging consensus that the bulk collection of millions of phone records needs to be overhauled or even ended.

Justin Amash, the Republican congressman whose measure to terminate the indiscriminate collection of phone data was narrowly defeated 10 days ago, said he was certain the next legislative push will succeed. "The people who voted no are, I think, hopeful to get another opportunity to vote yes on reforming this program and other programs," he said.

In the Senate, Democrat Ron Wyden said there was similarly "strong bipartisan support for fundamental reforms", a direct consequence of revelations about the nature and power of NSA surveillance. "Eight weeks ago, we wouldn't have had this debate in the Congress," he said. "Eight weeks ago there wouldn't have been this extraordinary vote."

On Thursday, Snowden was granted temporary asylum in Russia, to the fury of Washington. The White House said it was "extremely disappointed" in the decision, and hinted that Barack Obama may pull out of a bilateral summit with Vladimir Putin in September.

But even as Snowden was leaving the Moscow airport where he has been holed up for more than a month, Obama was telling key members of Congress at a meeting at the Oval Office that he was "open to suggestions" for reforming the NSA surveillance programs that have embroiled his administration in controversy.

Wyden, a long-standing critic of dragnet surveillance, is backing a range of legislative efforts that would end bulk phone records acquisition and revamp the foreign intelligence surveillance (Fisa) court, which grants the NSA legal authorization for its mass collection.

Several senators are supporting a bill introduced on Thursday by Democrat Richard Blumenthal which would introduce a public advocate into some proceedings at the court, which currently only hears the US government's case. In the past 30 years, it has turned down just 11 of the nearly 34,000 warrant requests submitted by federal authorities.

Senior administration officials have indicated they are open to Blumenthal's proposals – which would not in themselves curtail the NSA's powers.

Another measure directed at the Fisa court is being brought by House Democrat Adam Schiff, who sits on the powerful intelligence committee. Under his plan, the court's judges, who are currently selected by the chief justice of the supreme court, would be appointed instead by the president, a process that would require them to undergo a congressional confirmation process.

"Then you have these judges publicly vetted on their fourth amendment views prior to being placed on the court," Schiff said, referring to the constitutional freedom from unreasonable searches and seizures.

Other measures seek to make government surveillance more transparent. This week Democratic senator Al Franken introduced a bill to force the US government to regularly report on the number of Americans whose data is being collated by the NSA. It would also permit internet companies to disclose the number of requests they receive for data. "The American public deserves more transparency, and my bill goes a long toward doing that," Franken said.

A similar bill has been introduced by his Democratic colleague Jeff Merkley, who wants to compel the administration to disclose the key legal ruling from the Fisa court that governs how phone records are collected.

Representative Zoe Lofgren, a California Democrat who on Friday introduced a bill promoting greater transparency around surveillance orders received by private companies, stressed the cross-party nature of the measures. "If you've noticed, we've not had a rash of bipartisan efforts in the House," she said, referring to the gridlock that has held up other legislation.

There are other lawmakers who are pushing for more profound reforms. They include Republican James Sensenbrenner, the author of the post-9/11 Patriot Act, which the NSA has used to justify some of its data collection methods. His support of the Amash amendment last week revealed how far Congress has shifted in the weeks since the Snowden leaks were published.

Sensenbrenner said the Patriot Act was being interpreted to allow for forms of surveillance that were never envisaged when it was passed. He now supports an Amash-style bill that would prevent the NSA from hoovering up phone records without specific justification.

Most of the efforts focus on constraining the NSA's ability to spy on Americans. There is less congressional support for limiting its spying on foreigners' internet communication. One major exception is a measure introduced by House Democrat Rush Holt, that would repeal both the Patriot Act and the Fisa Amendments Act of 2008, two legislative pillars of post-9/11 surveillance.

Holt, who previously served on the intelligence committee, represents the most sceptical wing of Congress. "I learned that the heads of the NSA and other intelligence agencies are schooled in secrecy and deception. You can't always believe everything they say," he said. "They say these have stopped 50 attacks or something like that, and though I'm not on the intelligence committee right now, and I can't speak item-by-item, I can be pretty sure that there's probably not too much truth to it."

His bill represents the most radical congressional attempt at surveillance reform. Its prospects are not good, particularly because it would curtail Prism, one of the NSA programs to spy on the internet communications in foreign lands.

Schiff said Prism was more popular in congress for two reasons. First, Prism "is focused outside the United States and not on US citizens". Second, Schiff said its effectiveness is "much more substantial" than the phone records collection.

Intelligence officials have struggled to show how collecting bulk phone metadata was critical to foiling even one terrorist plot.

Lawmakers may fume at the idea of collecting the phone records of Americans, but they seem nonplussed at the notion the NSA can freely access the emails of foreigners.

Even those who do have concerns about Prism – such as Wyden – are looking for ways to ensure Americans are not ensnared in its dragnet, rather than ending it entirely.

"It has become increasingly apparent that the balance between security and liberty has been tainted," Sensenbrenner said in a statement after he left the White House meeting. "The conversation was very productive and everyone agreed something must be done."

Short link for this page: http://gu.com/p/3hn3q

Congress eyes second push for legislation that would rein in NSA