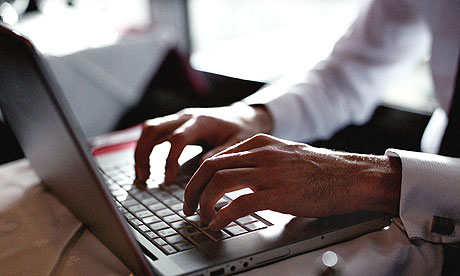 'The first amendment is supposed to guarantee me the freedom to speak out in situations like this,' Levison wrote. Photograph: OJO Images/Rex Features

The email service reportedly used by surveillance whistleblower Edward Snowden abruptly shut down on Thursday after its owner cryptically announced his refusal to become "complicit in crimes against the American people."

Lavabit, an email service that boasted of its security features and claimed 350,000 customers, is no more, apparently after rejecting a court order for cooperation with the US government to participate in surveillance on its customers. It is the first such company known to have shuttered rather than comply with government surveillance.

"I have been forced to make a difficult decision: to become complicit in crimes against the American people or walk away from nearly ten years of hard work by shutting down Lavabit," founder Ladar Levison wrote on the company's website, reported by Xeni Jardin the popular news site Boing Boing.

Levison said government-imposed restrictions prevented him from explaining what exactly led to his company's crisis point.

"I feel you deserve to know what's going on – the first amendment is supposed to guarantee me the freedom to speak out in situations like this," Levison wrote. "Unfortunately, Congress has passed laws that say otherwise. As things currently stand, I cannot share my experiences over the last six weeks, even though I have twice made the appropriate requests."

Privacy advocates called the move unprecedented. "I am unaware of any situation in which a service provider chose to shut down rather than comply with a court order they felt violated the Constitution," said Kurt Opsahl, a lawyer with the Electronic Frontier Foundation.

Several technology companies that participate in the National Security Agency's surveillance dragnets have filed legal requests to lift the secrecy restrictions that prevent them from explaining to their customers precisely what it is that they provide to the powerful intelligence service – either wittingly or due to a court order. Yahoo has sued for the disclosure of some of those court orders.

The presiding judge of the secret court that issues such orders, known as the Fisa court, has indicated to the Justice Department that he expects declassification in the Yahoo case. The department agreed last week to a review that will last into September about the issues surrounding the release of that information.

There are few internet and telecommunications companies known to have refused compliance with the NSA for its bulk surveillance efforts, which the NSA and the Obama administration assert are vital to protect Americans. One of them is Qwest Communications, whose former CEO Joseph Nacchio – convicted of insider trading – alleged that the government rejected it for lucrative contracts after Qwest became a rare holdout for post-9/11 surveillance.

"Without the companies' participation," former NSA codebreaker William Binney recently told the Guardian, "it would reduce the collection capability of the NSA significantly."

Snowden was allegedly a Lavabit customer. A Lavabit email address believed to come from Snowden invited reporters to a press conference at Moscow's Sheremetyevo Airport in mid-July.

While Levinson did not say much about the shuttering of his company – he notably did not refer to the NSA, for instance – he did say he intended to mount a legal challenge.

"We've already started preparing the paperwork needed to continue to fight for the Constitution in the Fourth Circuit Court of Appeals," Levinson wrote. "A favorable decision would allow me resurrect Lavabit as an American company."

He continued: "This experience has taught me one very important lesson: without congressional action or a strong judicial precedent, I would strongly recommend against anyone trusting their private data to a company with physical ties to the United States."

Opsahl noted that the fact that Levinson was appealing a case before the Fourth Circuit Court of Appeals indicated the government had a court order for Lavabit's data.

"It's taking a very bold stand, one that I'm sure will have financial ramifications," Opsahl said.

"There should be more transparency around this. There's probably no harm to the national security of the United States to have it publicly revealed what are the legal issues here," Opsahl continued.

Representatives from the NSA, White House, Justice Department and the Office of the Director of National Intelligence did not immediately reply to a request for comment.

Short link for this page: http://gu.com/p/3hqy2