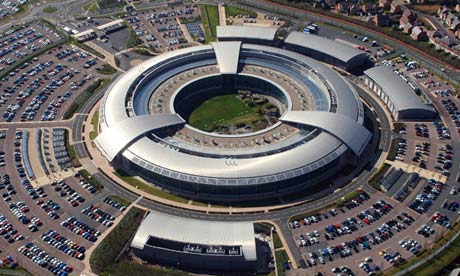 GCHQ's offices in Cheltenham, Gloucestershire. The agency was paid at lest £100m by the US government. Photograph: GCHQ/Ministry of Defence/EPA

Privacy campaigners have accused Britain's spy agencies of "selling their services to a foreign power" following revelations that the US government had paid at least £100m to GCHQ.

The top secret payments were set out in documents leaked to the Guardian by the US whistleblower Edward Snowden, who on Thursday was granted temporary asylum in Russia. They suggest that the National Security Agency (NSA) has substantially funded GCHQ over the last three years to secure access to, and influence over, Britain's intelligence-gathering programmes.

The documents also show that the Americans expect a return on their investment, and that GCHQ is acutely conscious of the need to meet US demands. Ministers have denied that GCHQ does the NSA's "dirty work" and have pointed to the US and UK's longstanding intelligence-sharing relationship.

But in the documents GCHQ describes Britain's surveillance laws and regulatory regime as a "selling point" for Washington. On Friday, Shami Chakrabarti, director of Liberty, said: "Once upon a time the rule of law was as great a British export as Beckham's right foot. Now it seems our most powerful security agency capitalises on weak legal privacy protections to sell its services to a foreign power."

Eric King, head of research at Privacy International, added: "Our intelligence agencies carry out some of the most sensitive and legally complex work in the world. It is shameful that the agreements between the NSA and GCHQ are shrouded in secrecy and this practice must come to an end.

"The special relationship that enables jurisdiction hopping is nothing more than a moral race to the bottom and shows contempt for the rule of law.

"The lack of oversight from parliament has become known around the world and has been exploited so that intelligence agencies can get what they want."

In the US Snowden's revelations have triggered intense debate, investigation by Congress, and a vote – narrowly defeated – to defund the NSA's most controversial programmes, King said. But in the UK parliament has greeted them with "deafening silence" and failed "to properly scrutinise GCHQ".

King said: "This makes them [MPs] complicit in activities that violate our privacy rights and erodes the public's confidence that parliament can effectively do its job."

His comments came as new photographs emerged of Snowden leaving Moscow's Sheremetyevo airport on Thursday. Published by the Russian website Lifenews.ru, they show the 30-year-old American grinning, his hair longer and more bouffant than when he first arrived in the airport's transit zone more than a month earlier. He is carrying a black rucksack and a holdall.

Next to the whistleblower is Sarah Harrison, a representative from WikiLeaks who accompanied him on his flight from Hong Kong. Also with Snowden is Anatoly Kucherena, his lawyer who on Thursday showed off his client's new Russian asylum document.

The Russian president, Vladimir Putin, has yet to comment after the White House said on Thursday it was extremely disappointed by the asylum decision. On Friday, however, a leading Kremlin politician said the Obama administration only had itself to blame. Alexey Pushkov hit back at comments by Senator John McCain who called the Kremlin's actions "a disgrace and a deliberate effort to embarrass the United States".

In a tweet Pushkov responded: "McCain asserts that, by giving Snowden asylum, Russia decided to 'humiliate' the US. That's not true. By stopping him from flying the US deprived Moscow of a choice."

Short link for this page: http://gu.com/p/3hmje