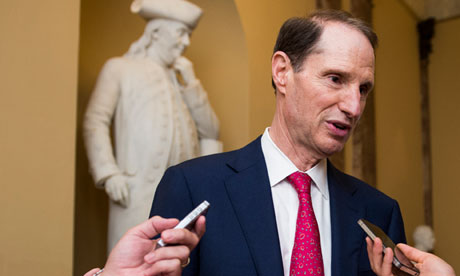 Senator Ron Wyden (above) and Mark Udall said: 'We believe Americans should know that this confirmation is just the tip of a larger iceberg.' Photograph: Bill Clark/CQ Roll Call

Two US senators on the intelligence committee said on Friday that thousands of annual violations by the National Security Agency on its own restrictions were "the tip of the iceberg."

"The executive branch has now confirmed that the rules, regulations and court-imposed standards for protecting the privacy of Americans' have been violated thousands of times each year," said senators Ron Wyden and Mark Udall, two leading critics of bulk surveillance, who responded Friday to a Washington Post story based on documents provided by whistleblower Edward Snowden.

"We have previously said that the violations of these laws and rules were more serious than had been acknowledged, and we believe Americans should know that this confirmation is just the tip of a larger iceberg."

On July 31, Wyden, backed by Udall, vaguely warned other senators in a floor speech that the NSA and the director of national intelligence were substantively misleading legislators by describing improperly collected data as a matter of innocent and anodyne human or technical errors.

In keeping with their typically cautious pattern when discussing classified information, Wyden and Udall did not provide details about their claimed "iceberg" of surveillance malfeasance. But they hinted that the public still lacks an adequate understanding of the NSA's powers to collect data on Americans under its controversial interpretation of the Patriot Act.

"We believe the public deserves to know more about the violations of the secret court orders that have authorized the bulk collection of Americans' phone and email records under the Patriot Act," Wyden and Udall said.

"The public should also be told more about why the Fisa court has said that the executive branch's implementation of section 702 of the Foreign Intelligence Surveillance Act has circumvented the spirit of the law, particularly since the executive branch has declined to address this concern."

In October 2011, the Fisa court secretly ruled that an NSA collection effort violated the fourth amendment, a fact first disclosed last year by Wyden. The Post disclosed the effort involved diverting international communications via fiberoptic cables inside the US into a "repository."

Shortly before Wyden and Udall hinted at even broader NSA violations of its surveillance authorities, the chairwoman of the Senate intelligence committee came to the NSA's defense.

Senator Dianne Feinstein, a California Democrat, said the majority of "compliance incidents" are "unintentional and do not involve any inappropriate surveillance of Americans."

"The large majority of NSA's so-called 'compliance incidents' are called 'roaming' incidents, in which the NSA is collecting the phone or electronic communications of a non-American outside the United States, and that person then enters the United States," Feinstein said.

"The NSA generally won't know that the person has traveled to the United States. As the laws and rules governing NSA surveillance require different procedures once someone enters the U.S.—generally to require a specific FISA court order—NSA will cite this as a 'compliance incident,' and either cease the surveillance or obtain the required FISA court order."

Feinstein's counterpart in the House of Representatives, Mike Rogers of Michigan, issued a similar defense of the NSA.

"The disclosed documents demonstrate that there was no intentional and willful violation of the law and that the NSA is not collecting the email and telephone traffic of all Americans, as previously reported," Rogers said.

"Congress and the court have put in place auditing, reporting, and compliance requirements to help ensure that the executive branch, the Congress, and the court each have insight into how the authorities granted to the NSA are used. As a result, even the inadvertent and unintentional errors are documented.

"We demand these reviews so the NSA can constantly improve and correct any technical missteps that may impact Americans. The committee has been apprised of previous incidents, takes seriously each one, and uses the oversight and compliance regime to provide us insight into these operations and whether further adjustments must be made.

"The committee does not tolerate any intentional violation of the law. Human and technical errors, like all of the errors reported in this story, are unfortunately inevitable in any organization and especially in a highly technical and complicated system like NSA. The committee will continue to work with the executive branch to reduce these errors."

Feinstein also denied an aspect of the Post's reporting that claimed she was unaware of a 2012 NSA "compliance" report. Feinstein said that she received it in a different format.

But Feinstein also suggested that her committee does not have full visibility into the NSA's operations.

"The committee does not receive the same number of official reports on other NSA surveillance activities directed abroad that are conducted pursuant to legal authorities outside of Fisa (specifically executive order 12333), but I intend to add to the committee's focus on those activities."

Executive order 12333 is one of the foundational texts of modern US intelligence. A decades-old presidential order, it is an informal guide to the rules and regulations of American spycraft, such as the nominal ban on assassinations. It lacks the force of law in name if not in practice; lawyers in the intelligence agencies keep copies on their desks. "It is the Bible," said Vicki Divoll, a former legal counsel for the CIA and the Senate intelligence committee.

The Democratic leader of the House of Representatives, Nancy Pelosi, a former senior member of the House intelligence committee, criticized the NSA on Friday, saying reports that it had overstepped its boundaries "extremely disturbing."

"Congress must conduct rigorous oversight to ensure that all incidents of non-compliance are reported to the oversight committees and the FISA court in a timely and comprehensive manner, and that appropriate steps are taken to ensure violations are not repeated," Pelosi said.

Pelosi was one of very few legislators briefed about the expansions of NSA surveillance activities after 9/11. She became a vocal critic of them when they were partially exposed under the Bush administration, yet once Barack Obama took office, her criticism ceased. She and the rest of the Democratic leadership worked hard last month to quash a legislative effort to end the bulk collection of Americans' phone records.

The office of the director of national intelligence and the White House did not respond to a request for comment.