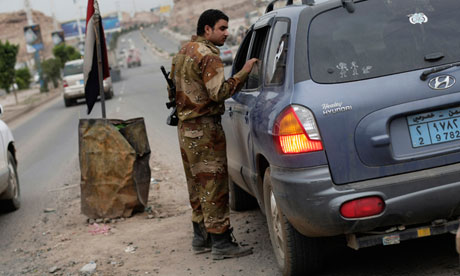 A Yemeni soldier inspects a car at a checkpoint on a street leading to the US embassy in Sana'a. Photograph: Hani Mohammed/AP

The closure of 22 US embassies over an alleged security threat was seized on by defenders of the National Security Agency on Sunday, amid claims that its controversial surveillance programme alerted authorities to "pre-9/11" levels of terrorist chatter.

A meeting of President Barack Obama's top security officials on Saturday concluded that intelligence apparently gathered from overseas communications intercepts showed a serious but unspecified threat against Western and US interests. The administration moved to shut the embassies across North Africa and the Middle East as a precaution.

Intelligence committee members in Washington who had been briefed on the alert said it was the most serious they had seen for years and repeatedly cited the threat during Sunday's political talk shows as a reason to resist growing calls in Congress for reform of the NSA's sweeping powers.

"There has been an awful lot of [terrorist] chatter, which is very reminiscent of what we saw pre-9/11," said the Republican senator Saxby Chambliss on NBC's Meet the Press. "As we come to the end of Ramadan, which is always an interesting time for terrorists, and the upcoming 9/11 anniversary, this is the most serious threat that I have seen in the last several years."

Chambliss, who was briefed by the vice president, Joe Biden, last week, said he believed the intelligence had been gathered by the NSA using foreign surveillance powers granted under section 702 of the Foreign Intelligence Surveillance Act.

"This is a good indication of why they [the surveillance powers] are so important," he said.

His defence of the NSA was echoed by another Republican, Lindsey Graham. Asked by CNN host Candy Crowley whether Americans were right to be frightened, senator Graham said: "It is scary … the NSA programme is proving its worth yet again."

The White House said it took the steps to close the embassies and put US troops on a heightened state of alert after specific intercepts coincided with growing worries about al-Qaida prisoners who escaped in a series of recent jail breaks in Afghanistan and elsewhere. It is particularly worried about al-Qaida activists believed to be operating in Yemen, although President Obama last week told the Yemeni president that he believed al-Qaida was on the retreat in the country.

A White House statement said: "Early this week, the president instructed his national security team to take all appropriate steps to protect the American people in light of a potential threat occurring in or emanating from the Arabian Peninsula.

"Given the nature of the potential threat, throughout the week, assistant to the president for homeland security and counterterrorism Lisa Monaco has held regular meetings with relevant members of the interagency to ensure the US Government is taking those appropriate steps."

The incoming national security advisor, Susan Rice, chaired a meeting on Saturday at the White House and was expected to further brief Obama, who was celebrating his 52nd birthday on Sunday.

A number of Congressional leaders concerned by the NSA's powers, particularly regarding domestic surveillance, urged caution over linking the latest terrorism alert.

Adam Schiff, a Democrat on the House intelligence committee, said: "This is not the usual kind of chatter … it had to be corroborated or come from very reliable sources to take this kind of action.

The UK Foreign Office said that the British embassy in the Yemeni capital, Sana'a, would remain closed on Monday after being shut all of Sunday, in the wake of an undisclosed security threat. British embassies in other capitals in the Middle East remain open.

In the eastern districts of Sana'a, Yemeni soldiers closed roads around the US and British embassies, witnesses said, only allowing residents through after rigorous checks.

"The ambassador is working and there is still a team out there doing their jobs," a Foreign Office spokeswoman said. She declined to elaborate if a specific threat had been made against the UK diplomatic mission in Yemen or what the nature of the general threat might be.

Short link for this page: http://gu.com/p/3hnfz